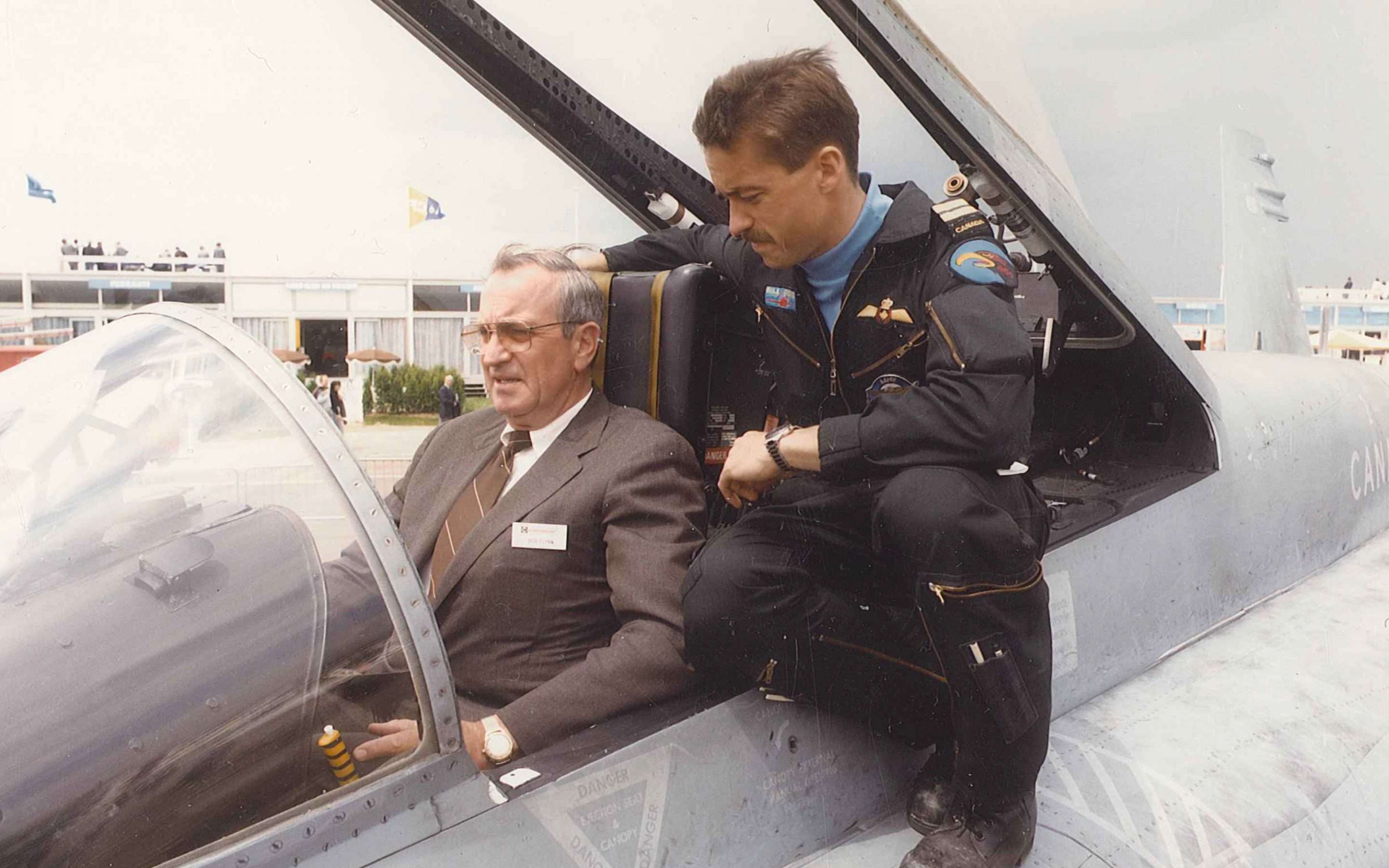 In the last stages of the long drawn out, painfully botched, fighter procurement to replace the 40-year-old CF-18 Hornets in Canada, Boeing invited six journalists down to St Louis to get an updated Super Hornet / Canada briefing.  There was a photo opportunity with a new Kuwaiti Block 3 Super Hornet (the RCAF’s next partner nation if Canada selects the Super Hornet), simulator flying and Business Development briefings.  Kudos to Boeing for pulling out all the stops in the final throws of this saga.  The loss in Switzerland must sting (pun intended) especially after the Swiss Federal Council debriefing stated that, based on their calculations, it would cost 2 Billion Euros more to procure and operate 36 4th Gen fighters for 30 years versus the 5th Gen F-35.  It seems inconceivable that a 30-year-old airframe design, with a mature logistics and sparing system, could cost more than the new 5th Gen platform that has taken so much heat in the press and from competitors like Boeing about operating costs.

One of the key issues that haunts Boeing in Canada is the trade dispute filed against the Bombardier C-Series airliner back in 2016 just as Bombardier had secured its US launch customer.  Boeing filed a trade dispute in the US court system, accusing Bombardier of dumping the cost of the airplanes.  The initial court ruling slapped a crippling tariff on the fledgling airliner.  The boldest move by Bombardier, forced by the Boeing trade dispute impasse, was to sell the C-Series airliner to Airbus for $1.  In the period that ensued, the courts ruled in favor of Bombardier and the tariffs were removed but for all intents and purposes, Bombardier was dead as the only Canadian aircraft builder.  In effect, Boeing killed Canada’s national aircraft manufacturing industry. 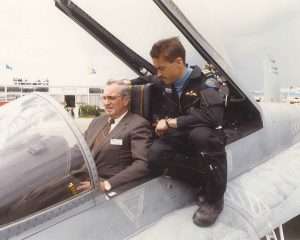 Bob ‘Pinky’ Flynn who was at the 1987 Paris Air Show demonstrating the Canadair Challenger 601 taking a tour of the CF-18 cockpit with son, Captain ‘Billie’ Flynn, based at CFB Baden-Soellingen, Germany who was demonstrating the Hornet at Paris.

My loyalty to Bombardier comes from my father’s 20+ year career as a demo pilot early in the Canadair Challenger days which evolved in the ensuing years under the Bombardier enterprise. In those days, their business aircraft division went head-to-head with Dassault and Gulfstream and was a significant force in the worldwide aircraft industry.  More importantly to this conversation, it was the pride of Quebec, controlled by a very powerful Quebec family.

That trade dispute played out in the summer of 2016 and was thought to be linked to the cancellation of the sole source Super Hornet purchase that the new Liberal government attempted to complete.  The sticker shock of the price offered by the US Government (and by default Boeing) of more than $6 Billion for 18 Super Hornets was the real killer of that deal and the trade dispute made walking away from the Super Hornet an easy move.  The backlash against Boeing remained in people’s heads for the near term but has faded as time has moved on, The never-ending delays in the fighter competition and the chance at winning the $19 Billion contract has Boeing working hard to convince everyone that times really have changed.  Except Boeing has failed to follow the rules of Tim Horton’s English, or rather Tim Horton’s Quebecois, in understanding French Canadians.

Remember that Phrase: “Je Me Souviens”?

For everyone who is not bilingual or has never seen a Quebec license plate (on the snowbirds driving down to Florida each winter), “Je Me Souviens” means “I Remember.”  Origins notwithstanding, it refers today to the French-Canadian heritage and the centuries-old battle between the English and French, and for equality in Canada.  Killing a Quebec-based national institution and hoping that Quebecers will forget is just plain ‘tone deaf’ to what matters in Canada.  Even more remarkable is not understanding how incredibly proud the 27% French speaking part of the Canadian population is.  Some Boeing Business Development ‘suits’ out of St Louis, Missouri, who have never visited Canada except to see Niagara Falls from the Canadian side or skied once in Banff, Alberta thought they could float the argument that all can be forgotten.  The latest tease is the promise of $61 Billion of offsets and 250,000 jobs in Canada for 88 Super Hornets (which won’t be built in Quebec or anywhere else in Canada for that matter).  Who didn’t understand Latin-blooded French Canadians in those meetings at Boeing thinking that Quebecers could be bought off and all would be forgotten? How gutsy was it to tell the latest visit of Canadian journalists that somehow the trade dispute issue was over?  It is worth noting that they did manage to get a sympathetic article in “Wings Over Quebec” https://www.wingsoverquebec.com/?p=9375 which is fairly stunning to see a turncoat article from a site that claims to be “Everything about Quebec’s aviation and aerospace industry”.  Hard to imagine that any Quebecer could be bought off that easily with a trip to Missouri and a Super Hornet simulator ride.

It is true that in most of Canada, we forget virtually every slight by Americans to Canadians…except when it comes to hockey…then we remember everything. But what works in English speaking Canada doesn’t work in Quebec.  Quebecers remember what happened on the Plains of Abraham in 1759, the pivotal battle in the Seven Years War, and in the resulting history of Canada.  I don’t find the Boeing pitch disingenuous because I flew F-35s and support it as Canada’s next fighter, but rather because Boeing killed a company and an industry my father helped build.

The Boeing sales pitch about 3:1 offset of commercial work for the $19 Billion procurement contract will be the subject of upcoming blogs. For now, it is worth focusing on one story that may well kill Boeing’s hopes in Canada…that Boeing killed Bombardier.

Remember my blog about the F-35 and dogfighting and how ‘Perception is Reality’?  No matter how capable the Boeing folks from St Louis may be, they cannot undo the perception in the minds of those workers at Bombardier, the Canadian taxpayers who funded that company (far too often by the way) or the population of Quebecers who ‘remember’ that Boeing was responsible for the demise of Canada’s lone aircraft manufacturer.  How can Canadians think of Boeing as a “Trusted Partner” to award the contract for the future RCAF fighter fleet when just 5 years ago their predatory attack did irreparable harm to our national aerospace industry?

When the winner of Canada’s fighter competition is announced and it is not Boeing, their long painful debrief needs to include how Boeing picked a fight with French Canadians over the Bombardier C-Series, thought they won that battle and then lost the war over Canada’s next fighter. “Je me souviens.”