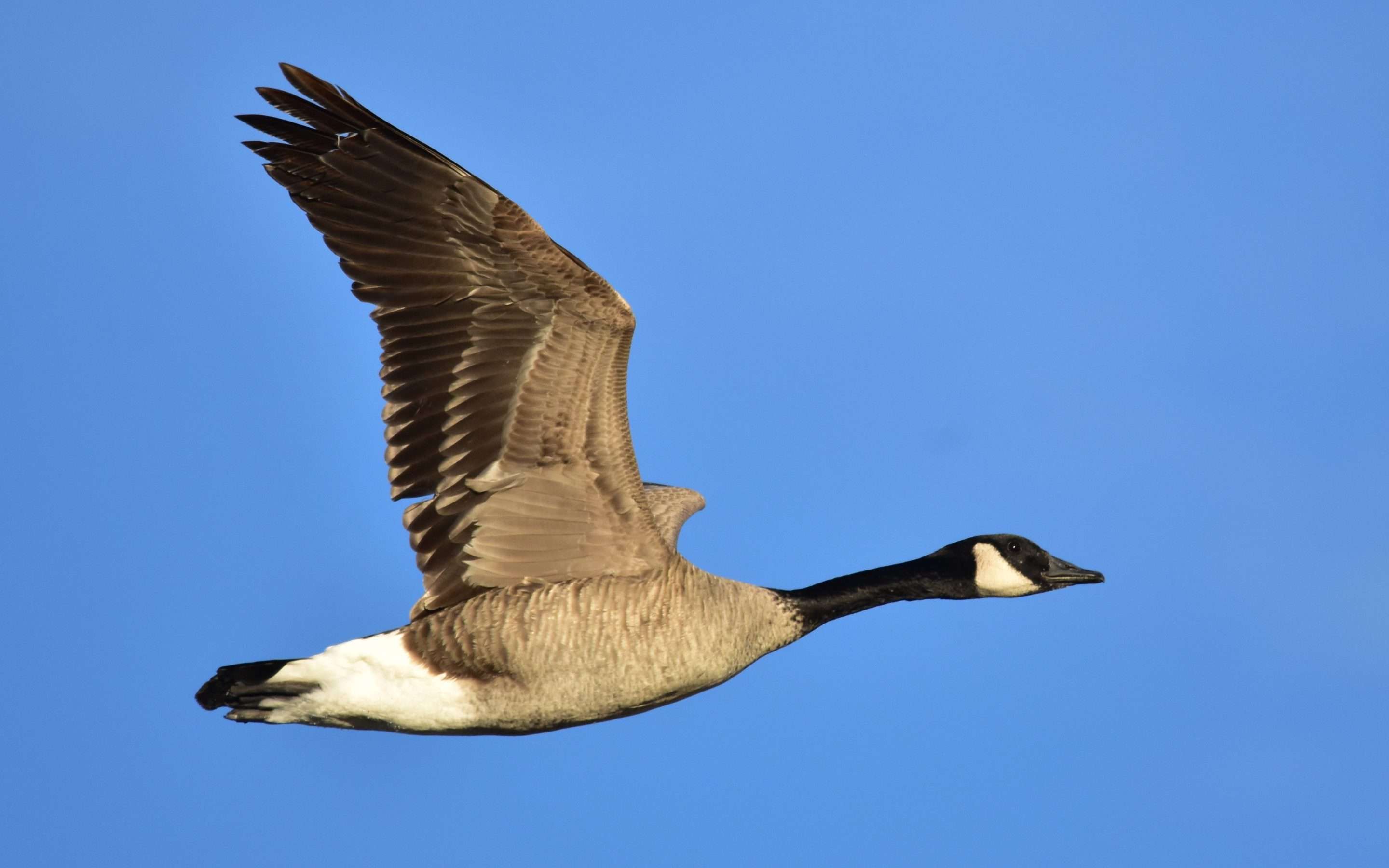 One of the keys to successful marketing is knowing how to speak the language and understand the culture. One of the most difficult markets for Americans is often in Canada. We are two nations separated by a common language. It seems too easy to come north of the 49th parallel and tell those nice Canadians how and what to do, especially when it comes buying military hardware. The greatest power in the world must caretake the peace-loving country to the north. In the pursuit of the lucrative 88 RCAF fighter $19 billion contract, the once-left behind Boeing Super Hornet has the moral support of Canadians. The CF-18, having been flown for 40 years in Canada (I first flew it 38 years ago), is still thought of as a relevant fighter by Canadians. Boeing, once out of the conversation when it was assumed that F-35 had things wrapped up in Canada, is now very much the front-runner. Boeing commercial contracts promise to bolster a fighter contract to make their offer very appealing even if the proposed job numbers are a gross exaggeration. The best marketing to disrupt the conversation is to get everyone’s focus on bird ingestion that would cripple single engine fighters, ‘the Goose that didn’t get the memo’. It has been the best line for the 4th Gen fighter, told over and over for more than a decade, keeping audiences focused on a mythical goose instead of dealing with how an older generation fighter could not match up with the latest technology advancements to protect Canadian resources in the arctic and along the coastlines. Boeing knows that Canadian readers don’t care about military hardware and are certainly not focused on spending $ billions when so many other issues concern families now. Smart as ever, their conversation never strays far from the mythical Canada goose.

Every Canadian knows what this means and unless a foreigner has spent enough time in the country, they won’t get the reference to the iconic donut shop, located on a street corner in every community in the country. Speak Canadian-English and not American-English. Positioning that Canadian pilots will ingest a goose down the engine intake, crippling the engine, forcing the pilot to eject over the cold arctic and perish, scares everyone. People who know nothing about fighter jets have become ‘experts’, converting to the Boeing mantra and insisting that Canada needs 2-engine fighters. Boeing is speaking to Canadians in English that they all understand.

Birds are a problem for everyone and need to be avoided by any type of airplane that flies. While our manmade metal flying machines usually win against the natural-born fliers, sometimes the birds win. The world came to understand that when a flock of birds took out the 2 engines of US Airways 1549 and forced the ditching of a fully loaded passenger airplane into the Hudson River. What are the odds of ingesting enough birds to snuff two engines and render a perfectly working airliner into a powerless glider?…. astronomical. 2 engines don’t guarantee redundancy. 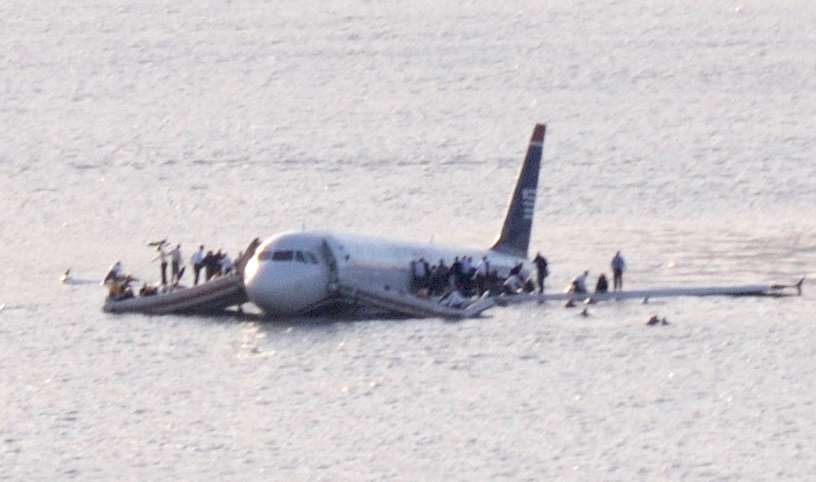 I was one of the early test pilots on Eurofighter and always knew that 1 x 10-19 were the odds of a double-engine flameout of a Typhoon.  Eurofighter is the second most unstable fighter ever built.  If it does not have hydraulics to power the flight control surfaces (from a working engine), it becomes unstable in pitch (up and down) and will go out of control very, very quickly.  What does 1 x 10-19 mean to non-math folks?  It means that once in a bazillion years could 2 engines fail at the same time in a Eurofighter…. never, ever, ever.  And how did we lose the first Typhoon?  The Spanish 2-seat prototype DA-6 had both engines fail at the same time, forcing the 2 pilots to eject as the jet lost controllability and eventually pancaked into the Spanish countryside.  Don’t ever believe that single engine or 2 engine fighters won’t hit a flock of birds like US Airways 1549 over the course of 40 years of service in the RCAF.  That could happen to anyone at some point.  The odds of 2 back-to-back catastrophe accidents of the Boeing 737 Max were certainly calculated by the engineers at some point in its development.  I am sure those Boeing risk mitigation calculations came out with odds like 1 x 10-19 example.  Again, so much for redundancy of 2 engines. 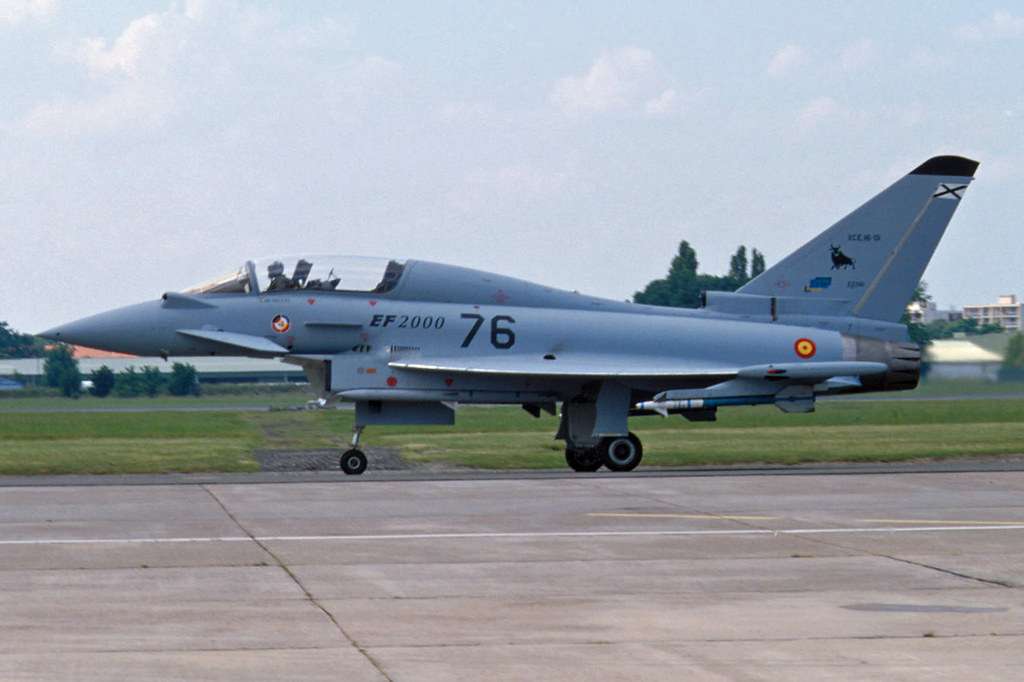 I hit a hawk in the front of the canopy during an F-16 test flying at 1,000 feet above the ground at 540 Knots (1000 km/hr.).  The famous F-16 poly-carbonate canopy flexed, and I felt the concussion of the canopy bowing in towards my helmet as the now-dead bird skipped off the side of my windscreen.

We avoid flying close to the ground in this generation of fighters because the enemy’s defenses are so lethal and we have learned to fly higher, out of the danger from short-range Surface to Air Missiles (SAMs).  But we also have learned to stay away from low level flying when birds are migrating or observed to be a threat.  In today’s fighter training, jets takeoff and climb to higher altitudes, spending less than 3 minutes close to where birds fly.  On return, jets descend into the traffic pattern and land, spending less than 7 minutes close to the ground coming back to land.  That’s very little time (about 10 minutes) where birds would be any kind of factor.  Fighters do not train flying low level to the ground as in past generations and their exposure would be limited to where Boeing’s goose would be looming waiting.  Birds don’t always go down the tiny engine intakes of fighter engines, but they can certainly hurt the airplane and pilot impacting other parts of our jets.

What’s so special about Boeing’s mythical goose that is supposedly going to force the single engine fighter to lose its motor and crash? The tale injects fear into the thinking of non-expert listeners and becomes a priority in the minds of many, overshadowing truly important considerations like survivability, capability, and affordability. Buying a new fighter because somehow the popular conversation says that it needs 2 engines ignores 40 years of technology advancements. Buying an older generation fighter at the end of its lifecycle risks that 4th Gen jet purchase quickly leaving Canada with an orphaned fleet. The US Navy is investing in 5th Gen F-35Cs and the 6th Gen Next Generation Air Dominance program. Based on the design of the YF-17 which first flew in 1974, adapted as the F/A-18 which first flew in 1976, upgraded and grown into the Super Hornet (first flight in 1995), the 4th Gen Block 3 Super Hornet is as good as it is ever going to be right now. The Block 3 version is the last major upgrade to the US Navy’s fighter. With no major upgrades even imagined in the coming 40 years of RCAF service, Canada would be going it alone trying to keep their 2-engine Super Hornets relevant in a rapidly advancing technological world.

What Should We Fear?

There are real threats that exist today and will only become more available to our primary adversaries and lesser developed nations.  When I flew in combat during Operation Allied Force over Kosovo in 1995, we naively thought that our CF-18 defensive systems would protect us from the existing Serb SAM systems.  What we did not realize is that the coverage on our jammers and detectors was focused in front of the Hornets and did not reach down low enough to protect far below our altitude of 20,000 feet where the SAMs would be shot from.  Lucky for us we were not targeted often. How lethal are SAMs?  Watch the video of a 2-missile shot from an S-300 and ask yourself if you would want an RCAF pilot in a non-stealthy 4th Gen Super Hornet being attacked from above and below at the same time. Birds are a risk, but SAMs are deadly.  We should fear the enemy’s systems that Canadian pilots will certainly face at some point in the next 40 years of service.

It is fascinating to watch how aggressively the 5th Gen development is denied by the competitors. Recall that Boeing’s single engine X-32 lost to Lockheed Martin’s X-35 in the winner-take-all competition. That competition meant that the winner would likely build around 3000 5th Gen fighters to replace much of the existing 4th Gen fleets. Had they won, Boeing would be pushing their 5th Gen F-32 and Lockheed Martin would be scrambling to sell F-16s to Canada right now. Imagine that. Why didn’t X-32 win? The X-32 was really ugly. Every test pilot knows that if an airplane looks ugly, it flies ugly. And we don’t build ugly fighters in the United States hence why X-32 never had a chance to become the F-32.

Remind Me About Costs

Canadians aren’t in the mood to spend $ billions now post-pandemic on new fighters; it is just not that important to anyone in Canada. But I return to what is happening in other parts of the world where fighters are being evaluated. What about the Switzerland competition and how does it apply to a Canadian competition? The Swiss calculated that the procurement of 36 fighters and sustainment for 30 years would be 2 billion Euros ($3 billion Cdn) less for an F-35 versus a 4th Gen Super Hornet. No one can really grasp how that happened and I certainly won’t leave that outcome alone anytime soon. How does a 4th Gen mature fighter cost so much more to buy and sustain into the future? If we translate the 36 airplane numbers into 88 fighters, would that result be 4.89 billion Euros ($7 billion Cdn) more expensive to procure and operate 88 Super Hornets instead of F-35s for 30 years? Any scaling of the Swiss calculation becomes a stunning number in favor of F-35. It will be hard to ignore when the number crunching is done.

How do you win the most expensive Canadian Air Force contract in history? You speak Canadian English, get everyone focused on a tale of a mythical Canada goose and keep them off-focus from the real issues at play. Will this disruptive tactic work in the long run? I have supported and tracked this competition almost as long as anyone else in Canada or the US. I observe that those Canadians who know anything about buying a new fighter most often ask about single engine flying in the arctic and the goose that will harm Canadian pilots. As I have said often, if I was working at Boeing, I would never stray from that line of marketing and keep everyone scared to look beyond the myths and see what really matters for a new fighter in Canada. Smart as ever, the conversation never strays far from the mythical Canada goose. Fear sells.