No matter how much fuel we start with, we always burn it and always want more. In legacy fighters, using underwing weapons stations to hang fuel tanks takes up where bombs or missiles could be hung, slows us down and hampers our maneuverability. That’s where Conformal Fuel Tanks (CFTs) come in. Putting fuel tanks flush mounted along the fuselage, reduces the drag penalty from those external fuel tanks, and increases range and endurance…almost for free it would seem.  Except there is no free lunch.

Super Hornet Block III promised CFTs and we have seen the promo photos with the fuel tanks bolted on to a new Super Hornet test airplane. But something happened (https://www.forbes.com/sites/davidaxe/2021/08/31/the-us-navy-tried-to-make-its-fighters-fly-farther-it-failed/amp/) and we have to wonder, how did Boeing screw this up?  CFTs were to be a game changer, at least for a test pilot like me.  All of a sudden, the Super Hornet would have the range capability closer to the F-35 and, for anyone in Canada and the US Navy, the reach of the Super Hornet would increase significantly.  One could then argue that with CFTs and the promised improvements of avionics capabilities, certainly in the Canadian context, Super Hornet would be ‘Good Enough.’  CFTs would really help the fuel calculations to fly the distances needed from the Main Operating Bases (Cold Lake or Bagotville) to the Forward Operating Bases (Inuvik and Iqaluit), with extra fuel for a weather diversion if needed.  Loading missiles on the weapons stations that were previously taken by external fuel tanks increases offensive capability that will matter in defense of the arctic and the potential of a Russian attack.  Without CFTs, the Super Hornet is only marginally better than legacy CF-18 Hornets which never had enough fuel, ever.

So how did Boeing mess up this opportunity?  Was there just not enough time to satisfy the US Navy’s requirements?  The story of almost all problems discovered during flight testing has been fixes that took months or years and often $$$ millions to rectify.  And time; except now, time matters.  Super Hornet is on its last major upgrade and there won’t be another in its lifetime, save for periodic minor improvements.  In the coming years, Super Hornet will have to fight for funding within the US Navy budget against the 5th Gen F-35C and rapidly coming 6th Gen Next Generation Air Dominance (NGAD).  There just isn’t extra money to support large changes and improvements for the 4th Gen Super Hornet and so neat modifications like CFTs have run out of time.

How did CFTs fail?  There is no doubt that the promise and relatively sexy addition of CFTs was going to be a visually significant step up for Super Hornet.  In Naval aviation, catapult and arrestment capability is everything.  Getting on and off the ‘Boat’ is a huge focus.  The violence of this environment eclipses anything land-based flying will ever stress on a fighter. Having CFTs bolted on the fuselage is like carrying a heavy backpack all day, every day and the structural loads would be cumulative over time contributing to real fatigue problems.  By all accounts, the stress of CFTs during catapult and arrestment testing opened engineering issues that could not be corrected in the small-time window for Super Hornet Block 3 flight testing.

There’s more to the story.

I first saw the CFT mods on Super Hornet at an airshow in Bangalore, India in 2009-time frame. We (the test pilots present at the airshow) all left at the same time each day after flying. We would all arrive back at the airshow the next morning for a repeat performance.  Except one day at the end of the airshow, we arrived for our morning briefing to find one of the Super Hornets with Styrofoam shapes bolted on the fuselage.  The Boeing workers had been busy overnight to make this new mod look very impressive and compelling.  They had even painted over the blemishes on the airplane to make it look close to brand new. 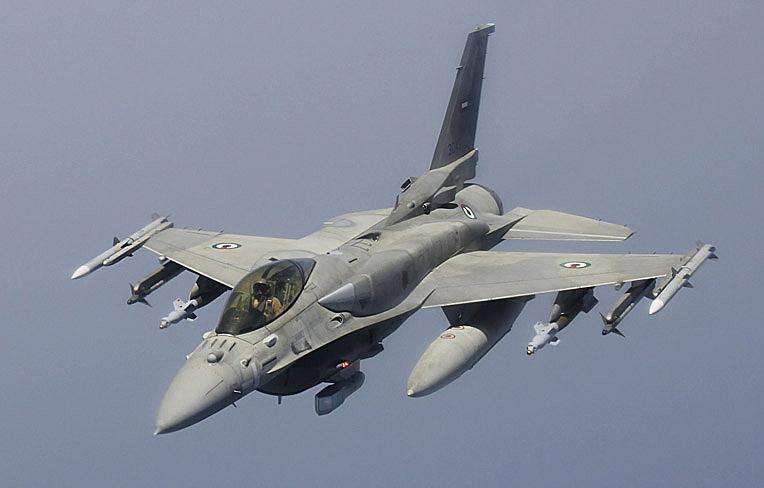 On the Lockheed Martin side, we were there with F-16 E/F models which already had CFTs developed integral to this new variant.  As I said in the opening, CFTs are intriguing because they solve fuel, performance and drag problems that all fighters face.  During the many years of F-16 E/F testing, we reported often about the CFTs and what we had discovered in flight test and learned about them.  Within the test pilot community at symposia like those held by the Society of Experimental Test Pilots, we talked about all the problems that we had encountered; logically the Boeing folks would have listened and learned.  And surely, they would have taken our lessons learned home to St Louis to ensure that they did not repeat the mistakes that we made…apparently not. 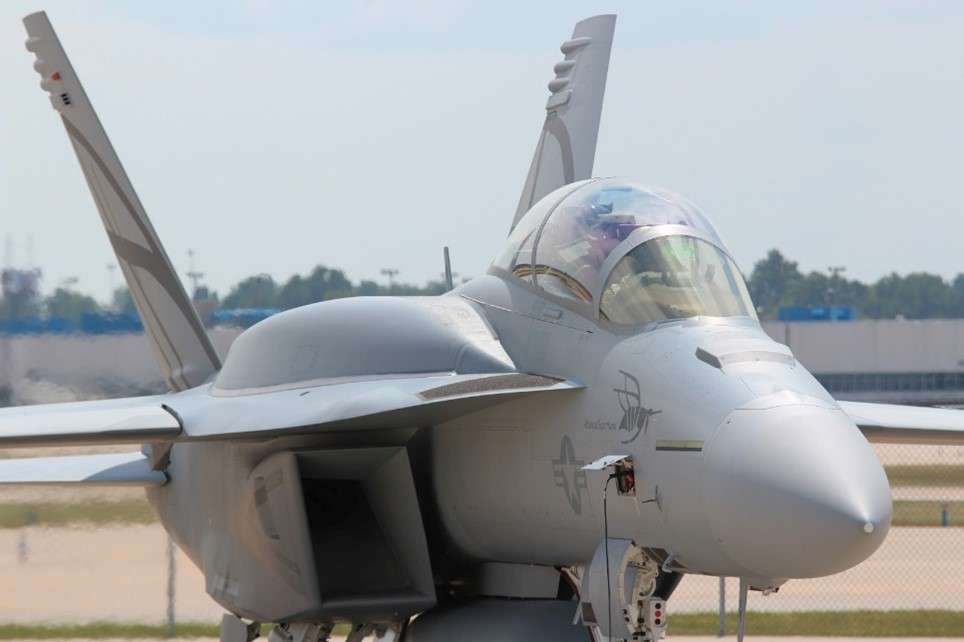 CFTs create a bump on the top of the airplane which changes the way the airflow comes over the fuselage which, in turn, changes lift.  Changing lift means that the jets will fly differently especially at slow speeds.  The boundaries where the jet goes out of control would change, and how the jet would recover back flying may also change.  That means that the CFT-equipped jet would have to undergo a whole series of testing in this regime.  New flight control software logic, changes in the structural loads, changes in how fast the jet accelerates, maneuvers and even aerial refueling (F-16 E model used to snake during refueling behind an air force tanker) would need to be tested.  Ultimately, bolting CFTs on the shoulders of a fighter means embarking on a full, expensive, time consuming flight test program.  Did someone at Boeing really believe that this was going to be easy?  The Hornet suffered significant fatigue issues to the fuselage over its lifetime and cost the users like the US Navy, US Marine Corps, Canada, Australia, Switzerland and Finland $$$ millions to manage, retrofit and maintain over the life of those legacy jets.  Block 3 Super Hornet promised an even longer flying life than previous versions and the CFTs were guaranteed to be an issue to crush that promise.  The fatigue life of a Super Hornet with CFTs bolted on would have to be ground tested to ensure that the newly promised increase in structural life had not been compromised.  Those ground tests are painfully long but cannot be avoided in developing a significantly modified airplane.

Who’s going to pay for it now?

In the US Navy, increasing the reach for the Super Hornet closer to F-35C would have made executing strike packages more effective being able to send fighters even further from the aircraft carriers against enemy targets.  Closer to home, CFTs helped neutralize the range advantages that F-35 would hold in operating distances in the Canadian arctic. 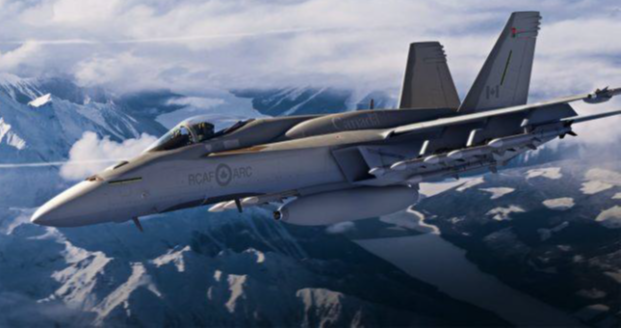 Loading up Super Hornets without CFTs to carry the fuel needed for arctic operations means not being able to carry the extra missiles needed to defend against an attack on North America.  And if the US Navy is not going to pay for CFT integration to be fixed, who would?  The testing would involve the complex work done at Naval Air Station Patuxent River, require a full time, dedicated test aircraft, control rooms for each flight full of many different engineering disciplines, chase airplanes and the ground tracking stations to monitor how the aircraft is behaving.  All told, that means a test program which is enormously complicated to coordinate, takes years to execute and funding for the jets, people, facilities and support needed, which means lots of $$$…lots of $$$.  Canada certainly is not going to dish out that money.  The expectation as a customer is that this work has been done already and certainly not a cost to be added to the price of the jet.  Paying for CFT development would be the ultimate sticker shock.  Knowing this and based on the news releases from the US Navy, CFTs, for all intents and purposes, are dead in the water.

Why does it matter?

I want to ask my Boeing friends how they messed this up when so much was at stake.  Not everyone has bought F-35, even though it has, thus far, won all competitions against 4th Gen fighters. Finland (64 jets), Canada (88 jets) and other nations still have competitions up in the air.  Boeing needed to close the gap against F-35 and CFTs certainly helped.  This was an elegant step to equalize the marketability between Super Hornet and 5th Gen, at least in one dimension.  One would have thought that Business Development ‘Suits’ could have worked better with Engineering ‘Geeks’ at Boeing to get the CFTs through flight test and on to the fleet.  But alas…something was missed.

And once again, we relearned that there is no free lunch.