I am not trying to shy away from writing but the opportunity to talk on the ‘Fighter Pilot Podcast’ series with Vincent ‘Jell-O’ Aiello was too good to pass up.  I love this podcast and the many diverse airplane stories that have been posted.  I am always learning something new and as an airplane geek, I love the trivia and often the context that is given to subjects I know little about.  I wanted to join Jell-O to fight off the F-35 haters yet again.  His audience is full of aviation enthusiasts and seemed like the perfect group to share perspective and context with.  The pet peeve of Canada and the F-35 is never far from my mind since it is the ‘gift that keep on giving’.  I wish I was employed to be somehow compensated for how long this saga drags on…the salary would be like a lifetime pension since there seems little hope that this decision will be resolved any time soon.

This spring, Laurie Hawn, former CF-18 Commanding Officer and former Member of Parliament, participated in a 3-way debate about Canada’s fighter competition with Boeing test pilot and friend of many of us, Ricardo Traven, and someone else talking on behalf of the Saab Gripen.  During that briefing, Laurie used a slide that was passed from Lockheed Martin (LM) and is part of an unclassified briefing based on a once classified battle analysis.  The scenario is essentially us (Blue Forces) outnumbered 3:1 against a Red Force.  That adversary, logically either Russian or Chinese, would fly 4+ Gen fighters and would be up against different scenarios of good-guy fighters (Blue). 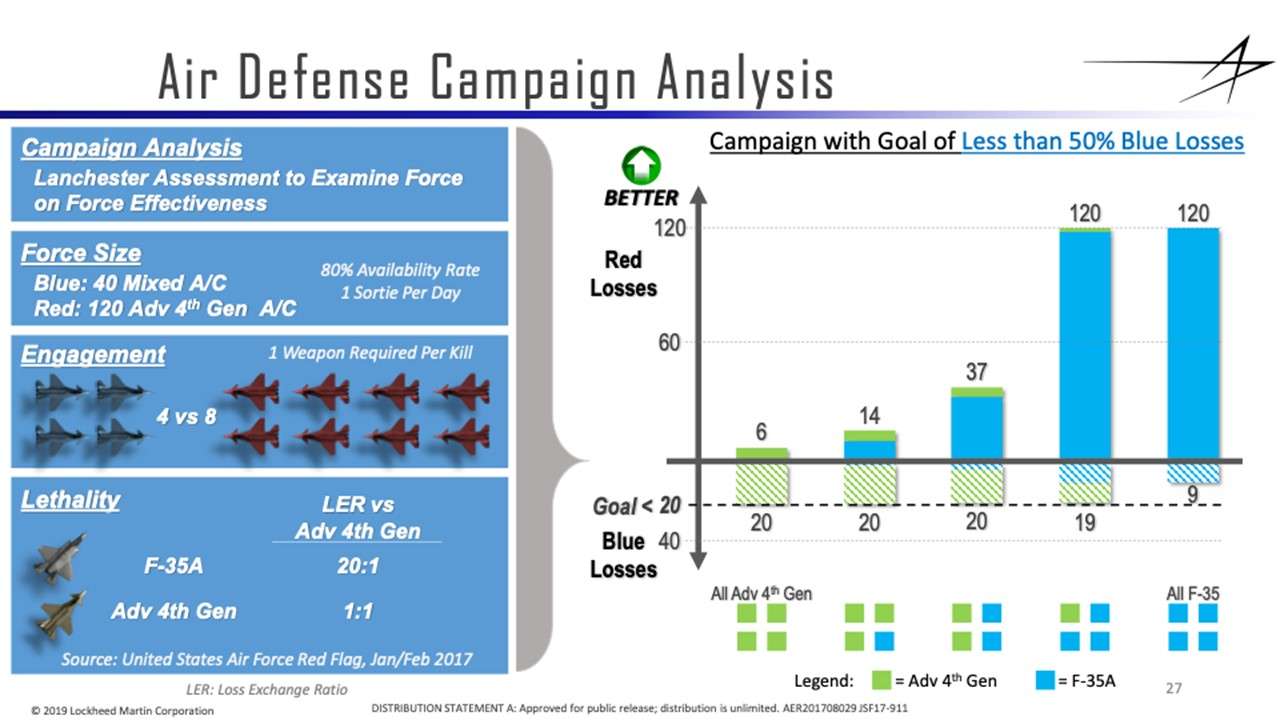 We start with 40 Blue fighters against 120 Red fighters.  We assume 80% availability of our jets and that they fly once a day.  We also assume the very best of capabilities for the advanced 4th Gen fighters that we use for Blue forces, likely more capable than a Canadian Super Hornet or a Canadian Gripen could ever be.  We assume that if we lose 20 of our Blue fighters, we have lost the battle.  The tool used is a US Government war game with a ‘Lanchester Assessment’ war gaming analysis which uses real world assumptions for how this battle would be conducted.  Neither Lockheed Martin nor the F-35 Program Office invented this data.  It comes from US Government assessments and was released for public viewing by LM (hence how it came to be sent to Laurie Hawn).

The Red Force is the best of our adversaries’ capabilities.  In the scenarios, the Blue Force starts with only 4th Gen fighters…and they only take out 6 Red before 20 Blue jets are lost.  When 5th Gen starts to be introduced, the exchange ratios improve with growing amounts of 5th Gen versus 4th Gen.  When 75% of the 5th Gen fighters in the Blue mix, all 120 adversaries are destroyed but there are still 19 Blue losses.  Only when there are exclusively 5th Gen fighters for Blue, does the Blue force neutralize all the adversaries while losing 9 fighters of their own.

So, what does this war game mean?  Who really understands or cares about military war gaming?  The lesson is stark even for politicians to see.  If Canada buys 4th Gen Super Hornet or Gripen fighters and ever encounters the adversary that we face across the polar icecap or off the Western coast of British Columbia, Canadian fighters will get shot down, pilots will die.   I read often that Canadians don’t expect to be sent in on Day 1 of the War.  Ask the Canadian pilots who flew in Desert Storm in 1991, ask the pilots who flew in Operation Allied Force in 1999 and ask any of us who have been deployed in combat operations whether the Canadians were going to be sent in last when the real fighting was over.  That assumption is absurd; there is no second string in combat…everyone is going into battle.  If Canada elects to buy a last generation fighter to replace the CF-18, then expect the risk of losing Canadian pilots in combat to be extremely high.

I usually stay away from the fear mongering when talking about F-35 or other fighters.  I heard it too often from my Boeing friends how Canadian fighter pilots are going to lose an engine in a single engine fighter from the ‘goose that didn’t get the memo’ and then crash and die in the arctic, never to be found.  All that rhetoric gets old especially as so much of it is taken wildly out of context.

The classified version of this briefing is more elaborate and was offered to Canada’s Standing Committee on Defense.  At the time, MP Stephen Fuhr (Liberal for Kelowna-Lake Country), who was once a CF-18 pilot and was head of that committee, repeatedly refused to receive the classified briefing about this analysis.  If he and other members of the committee had been briefed, they would have been compelled to honor the analysis and realize the potential consequences of pursuing a 4th Gen replacement for the CF-18.  As a stanch Boeing supporter, Fuhr was never going to permit F-35 to be given a forum where Super Hornet and 4th Gen fighter lack of survivability would be questioned.  Although he has since failed to be re-elected and returned to civilian life, the effect remained.  Canadian politicians were never briefed on what other nations’ leaders knew about the F-35 and future wars.  Today, in the last stages of this round of Canada’s fighter competition, no interaction with politicians is permitted and this briefing cannot be given to them.  Perhaps someday, decision makers will get to hear this information much as I have passed on a watered-down version in this blog.

It would be more effective if all Canadians could hear this assessment.  No one in Canada would ever allow Canadian fighter pilots to be sent into combat where their survivability would be at risk.  Forget the politicians, public opinion would be strong enough to dissuade a 4th Gen fighter from being selected.

Fear mongering…maybe there is a place for it in Canada.