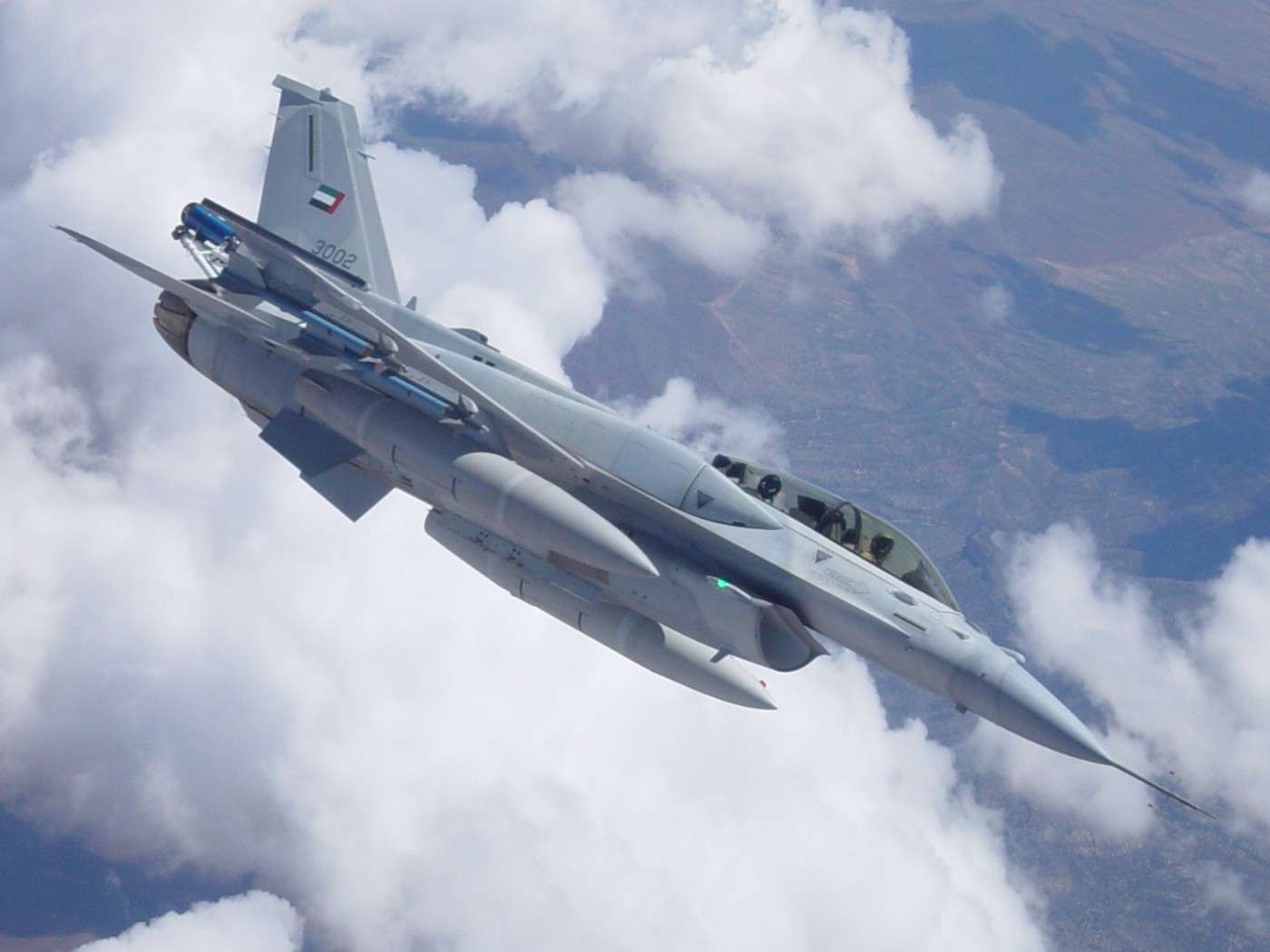 For many of us, the road we follow is deliberate but sometimes three forces play into life’s outcomes:  luck, choice, or fate.  This is likely truer in aviation than in other vocations, at least if you stay long enough.  And that is certainly the case with me and a foreign object damage event during early testing of the F-16F.

The newest and most impressive version of the F-16 was the E/F model, Block 60 in F-16 parlance.  No longer the lightweight fighter; this version built exclusively for the UAE Air Force was a monster compared to legacy F-16 models.  It had the biggest F-16 engine yet at 32,000 lbs. of thrust, conformal fuel tanks, an actively scanned array (radar), an incredible electronic warfare suite, new cockpit, Gucci flight control systems and more.  It was a beast, developed by Lockheed Martin (LM) engineers and test flown exclusively by LM test pilots, without an US government ‘help’. We flew mostly from the factory in Fort Worth, Texas but had a semi-permanent detachment at Holloman Air Force Base (AFB) in New Mexico to fly those tests that could not be conducted in the Texas airspace.

We built three identical 2-seat F models as test jets, with all the flight test instrumentation needed to complete the program testing.  I was given the second airplane, called RF-2, to conduct the first flights and then as it turned out, take that jet to Holloman AFB for a series of high-speed tests. Although our team had begun testing the first prototype (RF-1), first flights of the second and third prototypes were treated with ultra-conservatism since so much of the airplane was unproven, from a new engine to new flight controls to new air data sensing systems and so on.  This new Viper clearly was not our father’s F-16.  Our pre-flying work included running the engine on the ground and to ensure all systems worked as designed before risking the actual first flight.  2 ‘first’ flights were planned to ferret out any problems, similar in profile to the production acceptance flights flown with legacy F-16s when they first fly from the factory.  We take off in Military power (without touching the afterburner) and climb to 15,000 feet overhead the runway.  When we are safely there, we start manipulating the throttle from full Military power to lighting the afterburner (AB) then to Idle power then slamming the throttle between those three settings.  Once we are confident that the engine is working correctly, and after verifying a couple of other checks, we climb north of Fort Worth to special high-altitude airspace and at 30,000 feet, work the engine hard again through Idle to MIL to full AB. When we are satisfied that the engine won’t quit, we climb to 40,000 feet and race out to supersonic speeds, faster than 1.5 Mach (1.5 times the speed of sound) and check how the airplane is flying in the supersonic regime.  Assuming that the engine and airplane work okay, we then slow down and fly a series of avionics checks against our chase airplane (another F-16).  During that first series of tests, we are mostly within range of a runway to fly to if our engine quits, permitting us to at least attempt a dead stick landing.  Once we complete the high-altitude checks, we descend west of Fort Worth to fly in an area at lower altitudes used to complete the rest of our airplane flying behavior and internal systems’ checks. Once leaving the high-altitude area, we give up any chance of gliding back to a runway if our engine quits.  It is unusual for pilot to complete the full series of first flight tests on the actual first flight which is why we had planned two ‘first’ flights.  That second flight was then flown in the western flying area to finish the work not done on the first attempt.  Once done all those tests, RF-2 was ready to join the actual Block 60 testing.

After a couple of local Texas-based flights, I ferried the jet from Fort Worth across the state of Texas to Holloman AFB (White Sands National Monument) for the planned high-speed testing.  Our efficient test team of LM engineers and technicians usually planned two flights per day at Holloman, a morning test followed by debriefing, lunch, briefing and an afternoon test.  High Mach testing meant burning lots of fuel quickly hence very short mission duration times.  I flew the eighth flight in the morning with an LM test pilot mate.  We raced out about 1.8 Mach and conducted testing to confirm the performance of the airplane and behavior of flight controls.  Once complete, we landed and went in for debriefing and lunch.  At some point, we were informed by our ground crew that a fuel pressure sensor had detected a problem which required more in-depth inspection of the plane.  That in-depth inspection brought us to a dead stop.

In the fuel system, a fuel filter had captured little pieces of yellow hard rubber.  A further inspection found that a yellow hard rubber cap was wedged against the face of impeller for the main fuel pump.  Somehow, this cap had not been removed when the engine had been originally installed into RF-2, and then over the series of ground tests and eight flights been jammed down the fuel line until becoming lodged on the edge of the fuel pump that drives gas into the engine.  The procedures for installing an engine in the F-16 were known to everyone involved.  Lockheed Martin, like all aircraft manufacturers always had (and still has) a very robust and focused program to prevent Foreign Object Debris (also known as Foreign Object Damage or FOD).  FOD training is an annual requirement for everyone involved in assembly, maintaining, and flying aircraft.  We all know the many stories over the years of what FOD can do to damage airplanes and kill people. 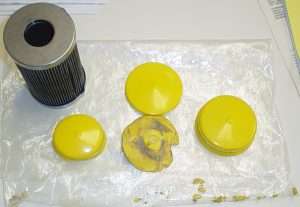 In this case, the FOD problem made our heads explode.  How could a bright yellow cap be put into a fuel line (where it did not fit in the first place – was too small to cap off the end of a line) and worse yet, be left in that line by the person who likely used it as a short-term measure to protect FOD from entering the line while other work was going on.  Although the brand-new engine was installed at the factory in Fort Worth, there was no procedure where an LM employee would need to cap off a line, with or without the proper sized cap.  Blaming the engine manufacturer wouldn’t help because their procedures were equally strict on assembling engines and shipping to customers.  Regardless of who did put the cap in place, no one saw it as the engine was fitted into RF-2 and none of the ground checks showed any degradation in engine performance from a blocked fuel line.

So, what could have happened over the course of 8 flights including a number of tests at high Mach?  The big yellow cap could have lodged itself over top of the fuel pump and starved the engine of gas at any point in time.  Fuel flows with the engine in full afterburner, especially at high Mach are insanely high.  Massive fuel flow would have meant amazing pressure in the fuel lines to get the fuel through to the engine at a super high rate, which in turn, would have dislodged and driven the rubber cap into the fuel pump and jammed it.  How the cap came to lodge itself and not move further over the face of the fuel impeller is impossible to imagine.

What did it mean to us?  In eight flights from start to finish, we flew very little time within gliding distance of a runway.  The F-16 glides amazingly well for a fighter without an engine, but no one wants to be the pilot who has to do a dead stick landing for real.  We would all rather practice in the simulator each month and occasionally simulate a dead stick landing with the throttle at Idle at the end of practice flights back at our home runway.  No one wants to find out that he / she guessed wrong and missed the landing try either being too short, missing touchdown and forcing an ejection or being too fast and long and running off the end of the runway, yet again forcing an ejection.  Mostly we don’t ever need to know if we are good enough to make it home without an engine.

The potential for disaster was there for eight full flights.  How did we miss losing an ultra-expensive prototype brand new F-16F?  How did we avoid a double ejection and harming two aircrew? Blind…. dumbass…luck.

As I wrote in the beginning, our lives so often are governed by luck, choice, or fate.  In this case, our lives were spared very uncomfortable and unpleasant outcomes purely by luck that the yellow rubber cap became lodged on the edge of the fuel pump and didn’t suffocate the engine fuel flow, allowing the engine to operate normally for a long time.

What is the lesson to be gained from this and why waste everyone’s time in this tale with just another pilot “There I Was” story?  It applies to all of us, almost every day.  Our good fortunes in life don’t just happen because we study hard, focus on being good at our jobs and live the good life.  Sometimes, we succeed and survive because we are just lucky, and we need to be humble enough to appreciate being fortunate that things go our way every now and then.  One of NASA’s great test pilots, Bill Dana, last man to fly the X-15, used to say, “take your job seriously, never take yourself seriously”.  We should remember that more often.  Sometimes it is better to be lucky than good.