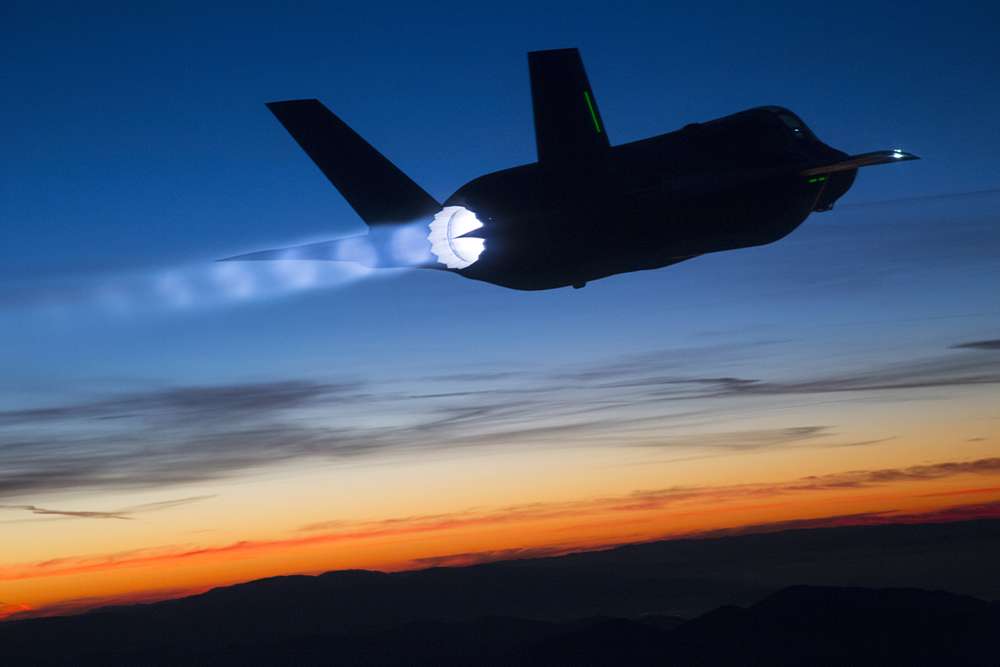 Why does Canada need a stealth fighter?

It takes 3 years to build a fighter plane.

It takes 26 years to build a fighter pilot.

We can build new fighter planes if they are shot down; we can never replace those fighter pilots, our sons and daughters.

Don’t say that Canada will never send their men and women into war again because history says that simply is not true.  As the former Commanding Officer of the CF-18 force that fought in Operation Allied Force in combat over Kosovo and Serbia in 1999, I can assure you that myself and the other 68 fighter pilots who flew in combat did not get asked to volunteer or get a vote.  We were ordered and flew into harm’s way in a land far away for a conflict that had nothing to do with our homeland.

So stealth matters because we want those Canadian fighter pilots to survive each and every time they fly.

5th Gen is not a marketing term.

The technologies found in 5th Generation (Gen) fighters are the product of over $50 Billion in research and development (R&D) during a 20-year period to reach the threshold of a 5th generation capability.  Recall that it took many years of research and development to get fly-by-wire flight control technology sufficiently mature to be able to incorporate that revolutionary capability into the 4th Gen F-16 and F/A-18.  Similarly building airframes that could maneuver hyper-aggressively took years of design studies and research to get to a point where F-16, and F/A-18s could safely fly at the extremes of the flight envelopes that we now take for granted. 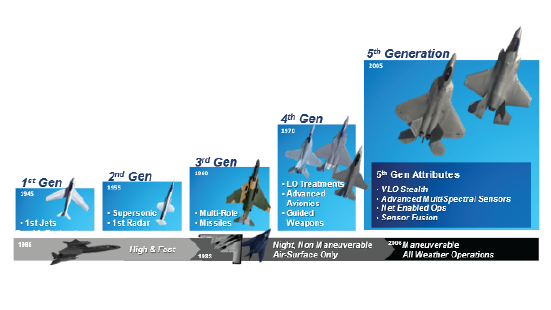 5th Gen Capabilities and Effectiveness Are Superior to 4th Gen

The CF-18 that I first flew was the product of years of research to be able to build a fighter with then amazing maneuverability, advanced composite material like graphite epoxy manufacturing and cockpit displays, plus Heads Up Displays flown for the first time in a fighter plane.

The key attributes of 5th Generation fighters are stealth and sensor fusion.  Let’s talk about stealth because many argue that it is not needed without realizing how critical it is for a country’s future.

Geometric shaping contributes to an aircraft being hard to detect.  We call fighters designed from the outset with stealth capabilities as being Very Low Observable (VLO) based on the size of the radar returns of that airplane.  VLO aircraft incorporate geometric shaping from the design stage so that all angles and orientations have the smallest chance of reflecting radar waves.  Generally, think of a VLO aircraft as having the radar return of a small bird or tennis ball or smaller even and certainly not the size of a big fighter plane as in the past.  You can retrofit older fighters by changing the ‘paint’ on the outside using special coatings and rounding some of the abrupt edges that make would make it harder for radar waves to bounce back off.  But to radically change a design, cover every protruding antenna, completely hide the engine from being detected (which is a major contributor to radar refection), eliminate having to suspend fuel tanks, bombs, missiles, and sensor pods would be all but impossible and impractical financially.  Simply put, without stealth baked into the design, it is impossible for designers / engineers to cover up and mask all the protrusions that contaminate radar refection and absorption.

The evolution of design, materials, manufacturing, and sustainment of stealth all contribute the ability to build a highly maneuverable fighter into a VLO profile.  See the F-35 demonstration at the Paris Air Show to validate that a VLO fighter is also super-maneuverable.

Worse, even if the radar cross section (RCS) was treated and reduced from the front, what happens when the airplane turns to the side or is detected from behind?  It is impossible to imagine that the same effectiveness of reducing the RCS would be as effective on the side or back end.

Marketers are smart and have understood that Stealth is a term that cannot be dismissed anymore so they refer to their own airplanes as being stealthy.  They say that a 50% reduction in RCS equals a 50% improvement in stealthiness.  Radar detection is calculated on a logarithmic scale which translates into only a 6% reduction in detection range.  If the enemy can see a Super Hornet at 100 miles, the newer version of Super Hornet would be detected at 94 miles away which is not enough to allow pilots to get close to a target, do their mission and survive.  Unless someone asked for clarification from the marketers, everyone would be fooled into thinking that the shape of their 4th Gen fighter was transformed into an equivalent to the B-2 bomber, F-22 Raptor or F-35.

If you can’t retrofit stealth enough to make a 4th Generation fighter survivable against modern day threats, can you attack with 4th Gen fighters?  The answer is yes, with enough other planes with specialty capabilities to jam the enemy defenses from detecting the 4th Gen fighters.  Would Canada purchase a new fighter and then the jammers needed to keep those new fighters survivable?  No… Acknowledging that you can still see a Super Hornet or Gripen from many, many miles away and threaten the lives of the pilots flying those airplanes, then how would we keep Canadian fighters safe to operate in the future without also buying those specialty jamming platforms?

Most assume that if an airplane looks stealthy, it cannot be seen on radar by the enemy and the pilots can fly undetected in and out of bad guy country.  However, emissions from radiating radars, other sensors, radio, and datalink communications all leave a trail of electronic signals that are as easy to detect as the radar reflecting of the airplane surfaces.  The electronic signature is as hard to mask and easy to detect as the radar reflectivity.  Remaining undetected also means hiding the electronic signature of the fighter.  Marketers that only talk about radar detection of their fighters clearly have never flown a stealth fighter to understand what else is required to be managed to remain undetected.

Counter Stealth – Infrared Search and Track = marketing term referring to and infrared search and track system (IRST).  Detecting hot (and cold) images at long distances allows an airplane to potentially detect another airplane without using a radar.  Fast-flying airplanes have hot surfaces along the leading edges of the wings and airframe.  Potentially the heat from the engine(s) can be detected with an IRST system.  Fighters have IRST systems in many forms from the Eurofighter Typhoon, French Rafale, Swedish Gripen to the F-35 to a pod being developed by Boeing for the newest version of Super Hornet.  IRST systems work if there are no clouds in the way at the distances the pilot is searching and if the object is hot enough to give a heat signature that can be seen long enough to classify what it is.  The pilot would need perfect weather, without clouds for 100s of miles to detect any objects that might be approaching.  IRST systems can find the direction of the heat source but need a long time tracking an object before they can resolve the distance equation to know exactly how far away an object really is.  If the fighter is not flying super-fast and is smart about hiding the heat signature of its engine(s), IRST will not be able to detect the object until it is close (in relative distances).

And if any clouds are in the way, the IRST system cannot see through clouds and the pilot would lose the object behind those clouds.  Think of all the days in Canada where clouds are present up to 40,000 ft and how seldom the weather is perfectly sunny and you can see why in the Canadian context, IRST has many limitations and better not be the only system a pilot is depending on to detect the bad guys.

Active Stealth – Electronic Jamming = Another marketing term that simply refers to Electronic Warfare jamming and delaying detection from enemy systems on the ground or in the air.  Think of it as sending out a cloud around your fighter hoping that the enemy cannot see through it.  The enemy will see the jamming signals the entire time but will have a harder time trying to find the precise location of the fighter.  This is not a cloaking system like the Romulans had in Star Trek TV show and movies and you cannot escape from the enemy that way…but the term sounds fantastic just not realistic.

Every fighter today has IRST.

Every fighter today has jamming capability.

Using the technical jargon to market fighters, the public is often confused into thinking that older 4th Gen airplanes possess special systems that will allow them to live in today’s threatening environment.  One of the telling tales of how vulnerable these older 4th Gen airplanes are to Russian threats was highlighted during the Finland new fighter competition.  During the in-country evaluation of capability, the Boeing team brought Super Hornet fighters plus the jamming airplane, the E/A-18G Growler.  The Super Hornet by itself cannot operate and survive against the Russian surface-to-air missile defenses which would be positioned close to the Finland / Russia border (which stretches 800 miles/1400 km north to south).  Similarly, Saab brought the Gripen fighter but also the Golden Eye electronic warfare platform (a militarized Bombardier Global Express surveillance and jamming airplane) to support the Gripens in their operations against the lethal Russian threat.  F-35 came without external help.  Super Hornet and Gripen are not survivable without additional aircraft to help; F-35 is.

Stealth as a measure to delay being detected ensures that pilots can approach their targets, complete their attacks, and return home safely each time.  Is reducing the radar detection the only protection a VLO aircraft has for survivability?  No but one certainly cannot survive in present environments or anytime in the future without VLO characteristics combined with other aircraft capabilities.

In the future we will talk more about stealth in terms of electronic detection and infrared (heat) signatures.  For now, let’s stick to stealth not being a marketing trick and the need to have stealth designed from the outset into a fighter.

And it matters to us all because we care most about the men and women who serve and who we entrust to protect us.  We send them into harm’s way in stealth fighters so that they can accomplish their mission and come home to us each time.  Remember, we can always replace a fighter plane, but we can never replace a fighter pilot.